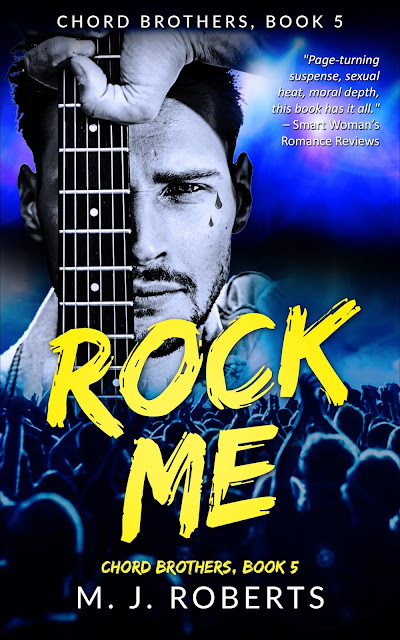 Betrayed by his family after serving time for a crime he didn’t commit, Spider’s angry at the world. The only solace he finds is playing his guitar. He’s fine, he’s good, and if anyone dares suggest otherwise, he’ll pull his knife on you, just to prove a point.
Maria’s devoted to her family and her dream. But when she’s forced to hide from some bad guys intent on torturing her for information she doesn’t possess, she’s forced to run — straight into Spider’s arms.
They’re on the road with the tour that will make or break Spider’s career — and his heart. 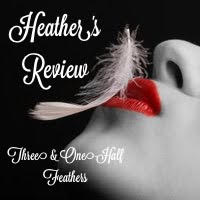 Rock Me is book 5 in the Chord Brothers series. While you don’t have to read the first four books in the series, I recommend it. I was kind of lost with the gaggle of people that are in this story. It was a little hard to follow for me.

Spider, the lead guitarist of the Rising Phoenix, has a friend that is in need of a favor. He agrees to take a woman that is in witness protection on tour with his band. Maria blends in well being a makeup artist and she also helps with the children on tour as well. What Spider didn’t expect was to have this sense of being Maria’s born protector. Things go a little off the plan and Maria needs more help than anyone imagined.

Get Your Copy Today!
In the series … 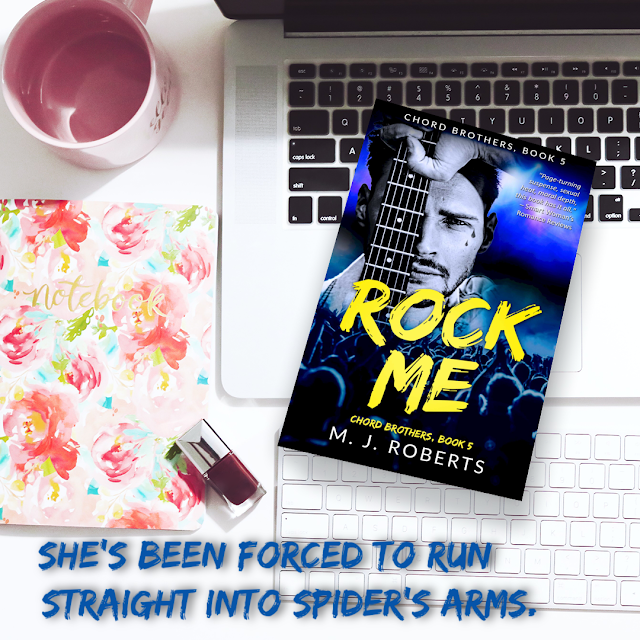 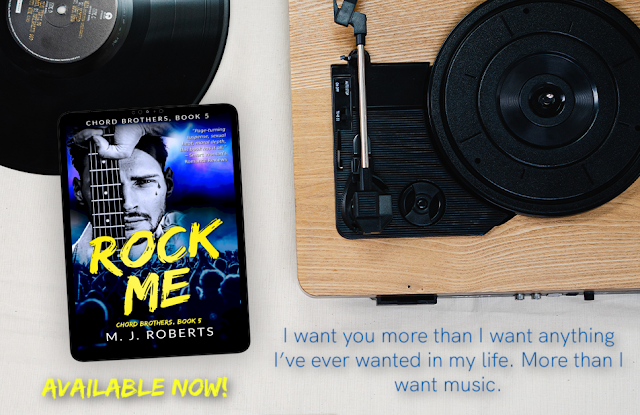 Spider's leaning against me and it's too delicious, too distracting, to let me think straight. But I should think. Since the tour began Spider has been acting like a jerk with no feelings. I don’t think he likes me, but he just said we had magic together. I want to believe him.
I’m a fool.
I’m so stupid.
“Querida?”
I shake my head.
Spider's lower lip drags sensuously around the shell of my ear, his tongue plays with my earing. He knows exactly what he’s doing, the bastard. “I’m going to make you scream my name until your throat’s sore. I’m going to claim you so hard you’ll forget there was anyone before me.”
I shake my head again.
“Yes, Meil,” he growls. “It’s time.”
I open my eyes and look at him. His stare is so intense it’s like he’s on fire. He kisses me, and it’s surprising with how gentle it is. My heart cracks, breaking.
“Spider, don’t hurt me,” I whisper.
“I would never hurt you,” he whispers back. “Never.”
I can do this. It’s just once. He’s probably a murderer, if his tattoos are any indication. I’m a hurt girl whose brother was killed and should never be with a cold-blooded man like him. We couldn’t be more opposite.
He grinds against me.
“I’m a selfish prick, but I want you more than I want anything I’ve ever wanted in my life. More than I want music, which is my life blood.” Spider’s accent is heavy. “More than I want life itself. Not just because you’re beautiful.” He caresses my knuckles down my cheek. “Not just because you light me up like someone struck firecrackers inside my body. Not just because when you are around the world seems sunnier. Not just because you’re the sexiest woman I’ve ever met.”
I snort.
“Don’t contradict me, woman.”
I can’t help smiling at him.
“It’s those things…” he says. Spider kisses me again, and it's so tender it brings an onslaught of hurt along with the gentle pleasure. He grinds his hips against me. His erection is even harder. He pushes my shirt up just enough to reveal the tiniest sliver of the bottom part of my breasts. I resist the urge to yank it back down to my waist. A jolt of insecurity hits me because of baring so much skin, but it vanishes when I see Spider's appreciative expression. He leans down and traces a heart around the crest of my breast with his tongue.
“It’s all those things, but it’s not just those things,” he says. “It’s something way greater than that. Way more than the sum of the parts.” Spider sucks on my nipple but it’s so light I barely feel it. I whimper for more. He pulls away, torturing me on purpose. He blows over where he’s just licked and sucked and my skin puckers up. A satisfied masculine sound bubbles out of him.
“I really dislike you.”
"Oh, Chica. I'm going to set about changing that." He kisses me behind my ear. "I'm going to start slow. Soft. But I am not going to take it easy on you."

M. J. Roberts is a writer, editor, and teacher – with more than two million copies of her stories in circulation worldwide, Roberts is well loved for creating characters who feel as real as your most cherished friends. Roberts works to diligently to create believable, lovable characters, witty dialogue, prose ripe with metaphor, exciting plot twists, action that keeps you on the edge of your seat, and romance scenes that sizzle.

Roberts is a multiple award-winning author including first place in the prestigious Summer Lovin’ Romance Literary Contest 2015 for the novel Risk Your Heart.

Roberts also writes under the pen name Natasha Action. Roberts is originally from New York but lives in the southern United States for the purpose of endless comic material.

She’s married to a professional musician (A.K.A. The Rock and Roll God) because she is too busy tormenting imaginary characters and counting her blessing to pursue her longtime dream of Rock n’ Roll stardom herself. 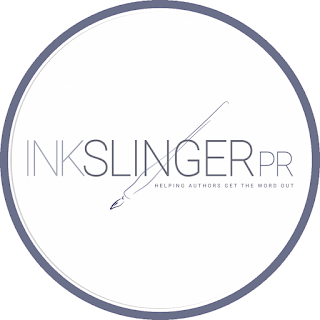