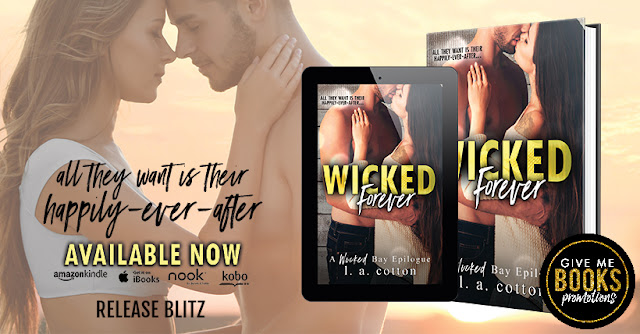 It only takes a second for everything to change.

Lo and Maverick weren't expected to go the distance, yet they proved everyone wrong.

But when their world is flipped upside down, and their plans for a life together hang in the balance, can they overcome all the pain, heartache, and uncertainty to get their happily-after-ever?

Or will this be the one thing that love can’t fix?

I LOVE A GOOD SERIES WHERE ALL THE BOOKS INTERTWINE WITH ONE ANOTHER AND THIS SERIES IS ONE OF THE BEST. TO GO FROM ONE BOOK TO THE NEXT AND THE CHARACTERS FROM PREVIOUS BOOKS CROSS OVER INTO THE STORY LINE. THE FAMILY DYNAMIC IS AMAZING. I HAVE FOLLOWED MAVERICK AND LO FROM THE BEGINNING AND A LOVE LIKE THEIRS IS BEYOND WHAT ONE COULD PUT INTO WORDS. TO GO THROUGH EVERYTHING THEY HAVE BEEN THROUGH, AND STILL COME OUT ON TOP DOESNT USUALLY HAPPEN....

WILL A LOVE THIS STRONG PULL THEM THROUGH THE WORST TRAGEDY THAT THEY HAVE FACED TOGETHER? WITH TWO VERY STRONG MINDED AND STUBBORN AS HELL PEOPLE, LET’S HOPE SO. WITH ALL THEIR HOPES AND DREAMS HANGING UP IN THE AIR, WILL THE STONE-PRINCESS BE ABLE TO COME TOGETHER AS AFAMILY AND SAVE THESE TWO FROM THEIR OWN HEARTACHE??

I MUST SAY I AM SAD THIS WAS THE END OF SUCH A GREAT SERIES. I HAVE YET TO READ ANYTHING BUT AMAZINGNESS FROM L.A., SO I LOOK FORWARD TO THE NEXT GREAT SERIES FROM HER.

I’d thought about nothing else except putting a ring on Lo’s finger, but the timing was never right. The first time I’d planned on doing it, Kyle beat me to the punch. Then the season had ramped up, and for the first time in years, the Scorpions qualified for March Madness. I’d tried at least two more times since then, but whenever I made plans, something would get in the way.

I’d finally planned to do it earlier this year when we won March Madness and I entered the draft. Only, we hadn’t won, and I’d decided not to draft after all.

Lo and I had been through so much. I wanted to draft knowing she was one hundred percent ready to stand at my side.

Book One, Wicked Beginnings, is 99¢ for a limited time!

Author of over thirty mature young adult and new adult novels, L A is happiest writing the kind of books she loves to read: addictive stories full of teenage angst, tension, twists and turns.