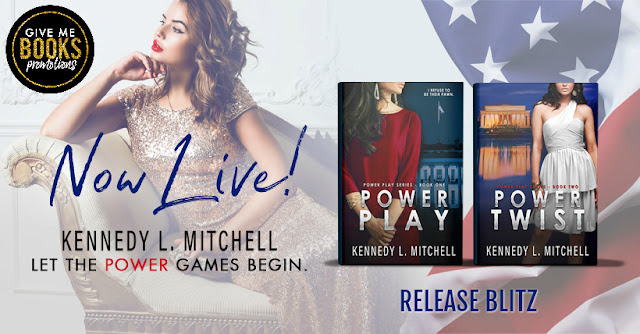 With the campaign over, a new devious challenge awaits.

I thought the toughest part was behind us. Stupid me. Now I have to live with the consequences of winning, some that make me regret ever stepping foot in this city. Day one in office I learn of the president’s true plan, one so manipulative I can’t allow it to come to fruition. But with zero allies to call on, I’ll need to work with my enemies to stand a chance at stopping him.

At least I have Trey, even if our scorching-hot affair can only happen in secret. Until the best part of my new life makes his own deal with a devil, I’m forced to make a choice. I can’t have it all in this power game they’ve woven, and watching me flounder is just part of their sick fun. Or can I play the game, change the rules, and have everything in the end?

Too bad for me, luck has never been on my side. It’s sink or swim here in DC, and I’m the idiot wearing cement shoes to the party.

Power Twist is the SECOND book in the five-book Power Play series offering more twists, turns and HEAT. Each book cannot be read as a standalone. All five books follow one main couple’s relationship as it grows through a five year time period. It’s suspenseful, steamy, and oh so unputdownable. If you’re a fan of Tiffany Snow, Meghan March, and Skye Warren then this series is for YOU!

I am loving this series so much!! They can not be read as standalone each book flows into the next.

We are following along as Randi, Madam Vice President, and Trey walk the political line. However, in very different ways.

Randi needs to find her power.....her voice. It peeks out from time to time and I can't wait till it comes around full circle. It's gonna be awesome. I love her personality and how she gets caught up in her own head.

Trey is trying to behave himself but I really wish he would stop. They need to heat up the sheets! LOL I'm sure it's coming. They have so much sexual tension going on its just insane.

With politics, with danger, with heat and the characters....this is one amazing series!

Start the series with Power Play
before jumping into Power Twist!

Kennedy lives in Dallas with her husband, son, and 80lb Goldendoodle who still believes he's a lap dog.

A bookworm at heart Kennedy loves to snuggle up in bed or by the campfire with an unputdownable book.

If you like strong heroines and sexy, tattooed men who can't keep their hands off them then this author is the one for you.