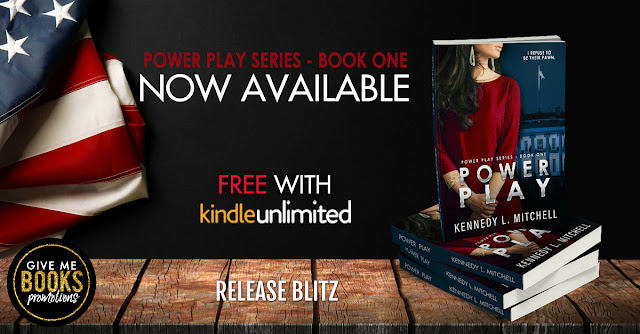 There’s no turning back. I can’t go home a failure—again. Everyone wants to use me, make me their pawn, but I have other plans. I will win this election or die trying.

Randi Sawyer
It started with a shady business proposal I should’ve turned down. Now here I am pretending to be someone I’m not, and bonus, I’m at the mercy of a man whose joy comes from my failures. The deeper I sink into DC’s seedy political scene the more I realize I can’t trust anyone if I’m going to make it out alive. Until him. Secret Service agent Trey Benson is bitter, jaded, and oh so hot with his mischievous smirk and cocky attitude. He hates me, just like everyone else, but he might just be who I need to survive this mess I’ve landed myself in.

Trey Benson
Forced onto her protection detail, I’m certain she’s just another Political Barbie in this city. I should know—I’ve dated most of them. Except she’s not. Funny, foulmouthed and crazy as hell, not to mention drop-dead gorgeous, Randi Sawyer just might be the one person who can make a difference in DC—and in me. Too bad the boss says she’s off-limits, that it’s too risky for her career and mine. Good thing I’ve never been great at sticking to orders.

Power Play is the first book in the five book Power Play series. These cannot be read as standalones. All five books follow one main couple’s relationship as it grows through a five year time period. It’s suspenseful, steamy, and oh so unputdownable. If you’re a fan of Tiffany Snow, Brittany Sahin, and Skye Warren then this series is for YOU!

Randi and Trey....just WOW! I really like political shows but I don't read them much. I guess politics and romance isn't a hugely popular story line. But this one is just amazing.

Randi is...well....I guess the awful term is trailer trash. Her Mom's a junkie that pretty much kicked her out at eighteen. Then she did the dumbest thing and got pregnant. So her situation became better but also much much harder. She wants out of her town, to make better of herself and her daughter and just generally be better. She has huge amounts of debt, bills, fixing to be evicted and her daughter is applying to colleges. So even more debt.

Trey is hot secret service dude. I mean enough said, right. However, there is a little more to his story than one might think. He supposed to be running for president, not protecting him. With his family name it only makes sense and it's what his parents want for him. But he hates politics.

When Randi gets the chance of a lifetime, bringing her completely out of debt, it throws her right into the lap of Trey. Their story is amazing.

With danger, family, romance and politics this book has everything. I enjoyed it very much!!

Kennedy lives in Dallas with her husband, son, and 80lb Goldendoodle who still believes he's a lap dog. A bookworm at heart Kennedy loves to snuggle up in bed or by the campfire with an unputdownable book. She began writing two years ago with Falling for the Chance and has no plans of stopping. Her novels are witty, action-packed, and offer enough steam for a great facial. If you like strong heroines and sexy, tattooed men who can't keep their hands off them then this author is the one for you.

Posted by Gretchen Anderson at 8:06 AM