Saving Each Other by Stacy Mitchell: Blog Tour + Giveaway + Review 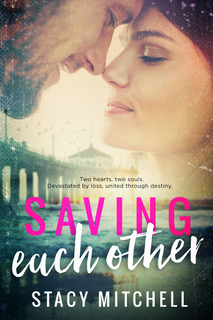 The rules: Communicate only through text messages and never reveal our real names or other personal details.

My name is Ean Montgomery. After the drunk-driving accident that killed my wife, son, and unborn daughter, I was forced to see a grief counselor. In an unconventional move, she gave me a private cell phone and the first initial of the name of a woman who had been widowed by the same accident. I had no intention of ever texting her but with all hope and the will to live gone, I found myself quickly slipping down the rabbit hole. Desperate, lonely, and unbelievably sad, I reached out to her and she became my everything.

My name is Dani Adams. I was married to my college sweetheart, the love of my life. Together we were raising our four-year-old daughter and running a successful business. Then the accident happened and life as I knew it ended in the blink of an eye. I didn’t want to answer his text but I was barely hanging on by a thread and he was in tremendous pain, so I replied. And once again, my world was forever changed.

I can’t lose you, I won’t survive…

Over the course of a year, through texting alone, we bond. Friendship blossoms into something deeper. We were never supposed to meet, but fate had other plans, and into this world of loss and despair, something amazing began to grow… But can the passion we’ve found sustain itself with the deep, soul-twisting pain that never seems to fade? 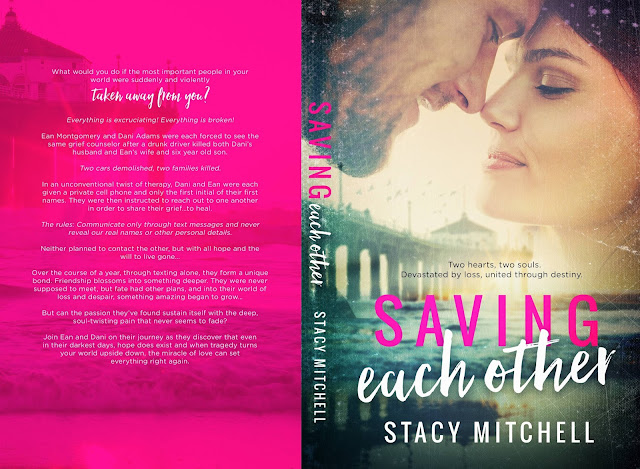 Holy roller coaster ride, bat man!! Saving Each Other is one amazing, sad, hopeful and loving kind of read. My mind is blown at how awesome this book really is.

After losing your true love, how do you go on? How can you love again? How can you breathe? This is what Dani and Ean had to figure out. After losing their other halves, they shut down. They didn’t live. Each other trapped in  their worst nightmare. That is until that one text. Will their lives find a happily ever after?


Stacy Mitchell has earned herself a spot in my authors that I will forever follow category. She knows how to write and keep the story going. Stacy never gave up the outcome too easy, she made you dig until you finally get what you want. Saving Each Other ripped my heart out from the very beginning; although it was put back together ... piece by beautiful piece. I cannot wait to see what you have in store for us, next!

E…you’re right. I had no intention of ever contacting you. But here I am returning your text because I also happen to be sitting on the floor by my front door. I know it’s against the rules to disclose any personal information and while I’m aware you know my husband, the love of my life, was murdered that day, I want you to know we have a four-year-old daughter. My reason for telling you this is because, if not for her, I too would be sitting in this exact spot, 24/7 waiting for him to walk through the front door.
D…the love of my life was murdered that day TOO! But not only was she killed, I also lost my six-year-old son and my unborn daughter.
ALL.
THE.
AIR.
LEFT.
MY.
BODY.
My heart stops and even though I don’t think it’s possible, it breaks even more. I text back.
I don’t want to say I’m sorry because that’s the stupidest thing to say and I’m sick of hearing it myself. But what you just texted me…I kind of understand now why people say that. My world ended the day he died and my in-laws constantly have to take my daughter because I can’t ever stop crying.
His reply is immediate.
That makes two of us.
Now I’m crying for the both of us.
E, to answer some of your questions, I am going through the same thing and I hate it. I hate all of this! I have no idea why it hurts so bad, it just does, and I don’t think we’ll ever move on. I don’t want to. All the color has left my world and I just want him back.
I knew contacting him would hurt, but in a weird way, it’s making me feel so…not so alone.
I want them back too…so badly! I can’t stop crying. This hurts so much. It feels like I’m carrying the pain of the entire world on my shoulders and I can’t seem to make it stop. I’m suffocating in my own anguish and I’m tired, D, I’m so incredibly tired.
I can’t breathe; his words wreck me. The only sound in my empty house is the sound of my pain. And even though I don’t want to, I can’t stop myself from texting him back. I don’t know why, I just do.
I can’t stop crying either. This is so incredibly wrong. It shouldn’t have been them. It should’ve been that monster! They were good people, E. Really good people. Why did it have to be them? THEY DIDN’T DESERVE TO DIE!
This time he took longer to respond, like he had to think about his answer.
I don’t know either. And you’re right, they didn’t deserve to die. I don’t understand how it happened? That intersection is always so busy. How could they have been the only two cars to be crossing at that exact second?
Oh my God! We really are feeling the same things.
I’ve thought about that a million times. It’s like the universe is out to get us! But I’ve done nothing wrong. I’m a good wife, a good mother, and a good person. He was coming home to celebrate our wedding anniversary and it was supposed to be the beginning of a happy weekend. Not a horrible end.
I watch the gray bubbles dance on the screen and wait to read his reply.
I’m a good dad, a good husband, and a good man. My son was going to get his yellow belt in karate. He was supposed to be walking through the door beaming with pride! We were supposed to be spending that weekend celebrating.
Why us, E?
I don’t know.
I don’t know either and I just curl myself up into a ball and cry. I don’t know how much time passes but I jump in surprise when I hear my phone ping.
D? Are you still there?
Oh my God, I forgot what I was doing.
Yeah, I’m sorry. I started crying again. Hell, I don’t think I’ve ever really stopped and I kind of forgot about the text.
His response is swift and understanding.
I understand. It’s hard to relive this.
It really is. How is this supposed to help us?
Although I see the bubbles on the screen, this time, they keep appearing and disappearing. It’s almost as if he’s unsure about what to say.
When Barbara gave me the new phone, I never thought reaching out to you would help but in some sick way, knowing you’re going through the same thing? It kind of does seem to help.
I was right, he was weary. It’s amazing how many emotions I can discern through his texts and it’s strange how I can already sense his soul.


I agree, I don’t feel so alone in all of this. 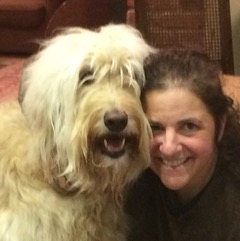 This story came to me in waves. Dani and Ean woke me up in the middle of the night and the best way I can it describe is…like listening to an audiobook. I felt their pain with such intensity it took my breath away. I got up, opened notes on my iPhone, and my thumbs got to work. I wrote it in a month. I then spent the next year and a half working with Francine LaSala (Google her…she really is incredible!) to get it where it is today.

I truly believe in soulmates, the one you connected with, time and time again throughout eternity. In the course of writing this book, I came to realize it doesn’t matter what form that soul takes because it’s the soul we embrace and the connection we share with that special soul. That the loss of someone you love takes all the color out of your world and that loss of every kind hurts.

I lost my goldendoodle to cancer. I watched my beautiful, strong, vibrant dog, that one soul that always makes you smile and lift your spirits, take his last breath. I had nine years with my Norman and while I cherish every minute I had with him, he still left this world, far too soon.

Embrace the ones you love. Cherish the time you have with them and celebrate it. Always celebrate it!