His Hand Me Down Countess by: Sorcha Mowbray - Blog Tour 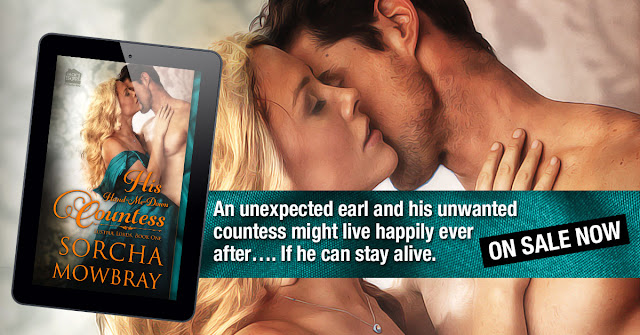 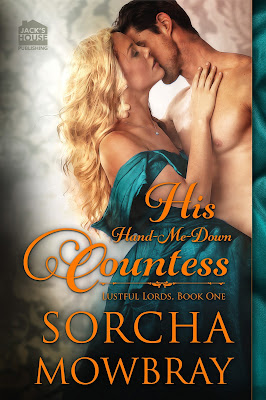 His brother's untimely death leaves him with an Earldom and a fiancée. Too bad he wants neither of them...

Theodora Lawton has no need of a husband. As an independent woman, she wants to own property, make investments and be the master of her destiny. Unfortunately, her father signed her life away in a marriage contract to the future Earl of Stonemere. But then the cad upped and died, leaving her fate in the hands of his brother, one of the renowned Lustful Lords.

Achilles Denton, the Earl of Stonemere, is far more prepared to be a soldier than a peer. Deeply scarred by his last tour of duty, he knows he will never be a proper, upstanding pillar of the empire. Balanced on the edge of madness, he finds respite by keeping a tight rein on his life, both in and out of the bedroom. His brother’s death has left him with responsibilities he never wanted and isn’t prepared to handle in the respectable manner expected of a peer.

Further complicating his new life is an unwanted fiancée who comes with his equally unwanted title. Saddled with a hand-me-down countess, he soon discovers the woman is a force unto herself. As he grapples with the burden of his new responsibilities, he discovers someone wants him dead. The question is, can he stay alive long enough to figure out who’s trying to kill him while he tries to tame his headstrong wife?

I just LOVE historical romance! Like it's just such a bit of fresh air.


In these days of equal rights and women an do anything men can we do gain that equalness but we also lose a lot in that process.
The part where the man is the man and the women did women things. They looked pretty and took care of the house and the social calendar (which was no easy feat in those days), the kids but most of all she cared for her husband for better or worse. There was no divorce and you sometimes didn't even marry for love. But there was respect most of the time. They knew their place and there wasn't any type of control issues.
Add all of this with love, devotion and dedication and you have yourself one hell of a book!
Except there is a small twist.....his bride doesn't fancy herself in need of a husband she has what she needs all on her own. Twist #2: what about adding in a murder mystery?? Yep....if that doesn't make you want to read this book I really don't know what will! LOL
Very Highly Recommend!!!!

Stone heard the butler intone his name and title loudly enough for all of London to hear, let alone the population of the Devonses’ ballroom. Had anyone suggested three years ago he would bear the family title, Earl of Stonemere, never mind be contemplating his future nuptials, he would certainly have laughed. True, he never actually laughed anymore, but he certainly would have found such a claim incredulous.

It was no longer an amusing matter.

Having survived the receiving line, he eased through the crowded ballroom. Every few feet, he stopped to speak with one acquaintance or another. Not so long ago, these same people would have been running for the hills and hiding their daughters. But fate, a fickle mistress to say the least, had other plans.

Moving with a quickness born of desperation, he barely acknowledged the next three men as the heat from the crowd paired with the stench of perfumes and body odor to choke him. After his service in India, crowded entertainments such as a ball had grown difficult to endure. The press of bodies and the loud murmur of conversation punctuated by the occasional shrill laugh smothered him, too similar to the roar of battle and the cries of the dying.

Moving past a swarm of silk skirts, he spotted a dark, hidden alcove, an oasis from the overwhelming onslaught, both real and imagined. If he could shut it down quickly enough, he wouldn’t embarrass himself. If he failed, all of London would learn just how broken he was.

He was an earl. Not a soldier. Never again a soldier.

Once the cool darkness enveloped him, he opened his mouth and drew a breath. His pounding pulse eased as the vise around his chest released and his damp skin dried. After another quarter hour spent tucked away, he believed he could manage the crowd long enough to find his betrothed.

As any good officer would, he had a strategy. Find her, claim his dances, and then await each one either on the balcony or on the dance floor, if required. Even the cardrooms at these soirees bordered on disabling.

He reached for the drapes to his hideaway, but hesitated as two women tittered in the immediate vicinity.

“Why, Gladys, I heard his name announced earlier. I’m certain Matilda invited Stonemere despite all the gossip.”

“I simply cannot imagine what she was thinking,” the one called Gladys said.

“Can’t you? Having one of the Lustful Lords in attendance at your ball? I daresay everyone who is anyone will wish to be able to say they were here. It’s all so deliciously scandalous and yet possible now the unmitigated rake is off the market.” Gladys’s friend sighed with a bit more drama than anyone in their right mind or otherwise would deem necessary.

“Well, one should hope that man can contain himself what with all these poor young virgins parading around. It would serve Matilda right if he debauched each and every one of them while here under her auspices.”

“Oh, do be sensible, Gladys. He could perhaps ruin four or five in one night, but all of them?”

Past ready to find his fiancée and escape his hidey-hole, he stepped out next to the ladies in question, turned to them, and bowed over each of their hands. The shock on their faces far outweighed any notion of good manners on his part. “Why, ladies, you both give me far more credit than I deserve. Even in my heyday of debauchery, I could only service three ladies in a single evening.”

As the two ladies sputtered, he departed their corner. The temptation to turn and wink at the gossipers won out, which caused another round of tittering and sputtering from behind him. Of course, he was well aware of what proper Society called himself and his friends. But the Marquess of Flintshire, Earl of Brougham, Baron Lincolnshire, and Viscount Wolfington—as well as himself—held little regard for polite society. Each of them had learned the hard way that they had no place amongst their peers. 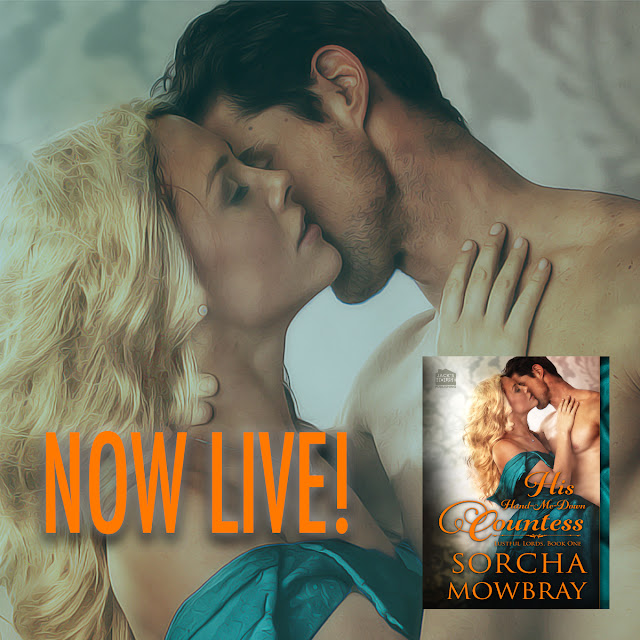 Sorcha Mowbray is a mild mannered office worker by day…okay, so she is actually a mouthy, opinionated, take charge kind of gal who bosses everyone around; but she definitely works in an office. At night she writes romance so hot she sets the sheets on fire! Just ask her slightly singed husband.

She is a longtime lover of historical romance, having grown up reading Johanna Lindsey and Judith McNaught. Then she discovered Thea Devine and Susan Johnson. Holy cow! Heroes and heroines could do THAT? From there, things devolved into trying her hand at writing a little smexy. Needless to say, she liked it and she hopes you do too!