Before you Break by K.C Wells & Parker Williams 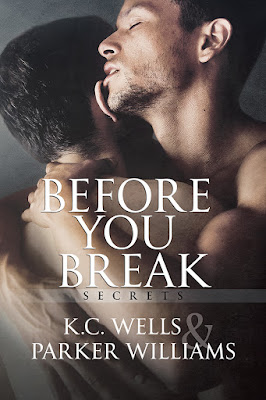 Six years ago Ellis walked into his first briefing as the newest member of London’s Specialist Firearms unit. He was partnered with Wayne and they became fast friends. When Wayne begins to notice changes—Ellis’s erratic temper, the effects of sleep deprivation—he knows he has to act before Ellis reaches his breaking point. He invites Ellis to the opening of the new BDSM club, Secrets, where Wayne has a membership. His purpose? He wants Ellis to glimpse the lifestyle before Wayne approaches him with a proposition. He wants to take Ellis in hand, to control his life because he wants his friend back, and he figures this is the only way to do it.

There are a few issues, however. Ellis is straight. Stubborn. And sexy. Wayne knows he has to put his own feelings aside to be what Ellis needs. What surprises the hell out of him is finding out what Ellis actually requires.

This book is so good. Two hot cops!!
In this book we have Ellis and Wayne partners on the same police force. Wayne is into his partner but doesn't know his status. He does however know that Ellis needs some control in his life. So being the Dom that he is, he takes Ellis under his wing.
Good things happen and they being their relationship until a tragic event happens on the job that threatens everything they've built.
Ellis is young and hot, like lickable hot. He's confused about his sexuality and with his life spiraling out of control Wayne is exactly whats needed.
Wayne is an older cop, well respected, but with a secret no one else on the force knows about. Until Ellis.
The sex in this book is hot and the submission is sweet and sexy. I love how they take precautions and they aren't afraid to have the conversation about cleanliness and their HIV status. This is the first book I've read that the safe sex was handled very well. Even when someone begs for no condom, the other was strong enough to say no. It written in so organically that it doesn't take away from the sexy youre reading.
My only complaint was that Wayne was windy during sex and Ellis was a little too cheeky for a sub.
Beautiful story and I cannot wait to what happens to them in the future.

K.C. now writes full-time and is loving every minute of her new career. The laptop still has no idea of what hit it… it only knows that it wants a rest, please. And it now has to get used to the idea that where K.C goes, it goes.

And as for those men in love that she writes about? The list of stories just waiting to be written is getting longer… and longer….

Happily Ever After Comes With A Pricetag. Parker Williams began to write as a teen, but never showed his work to anyone. As he grew older, he drifted away from writing, but his love of the written word moved him to reading. A chance encounter with an author changed the course of his life as she encouraged him to never give up on a dream. With the help of some amazing friends, he rediscovered the joy of writing, thanks to a community of writers who have become his family. Parker firmly believes in love, but is also of the opinion that anything worth having requires work and sacrifice (plus a little hurt and angst, too). The course of love is never a smooth one, and Happily Ever After always has a price tag.