The Viscount and the Artist by: Alyson Pearce - Review Tour

The Viscount And The Artist - Alyson Pearce 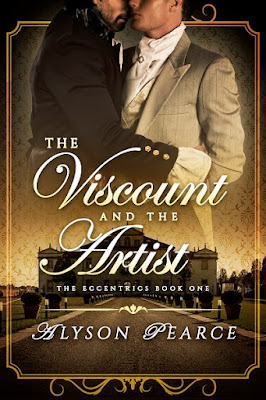 Andrew Cardwell is a man driven by duty to his country and to his family. After the death of his uncle, he's determined to provide security and stability for his family as the new Viscount Cardwell—even if that means marrying and producing an heir. Surprising himself, Andrew decides to sponsor a young artist named Jeremy for the season, to help him find a patron. What he doesn’t anticipate is how well Jeremy fits in his bed…and his life.

Jeremy Leighton knows what it’s like to be a disappointment. The only son of a vicar, he's refused to follow the path his father set for him, choosing his passion for art, instead. He accepts Andrew's proposal, hoping to prove to his father—and himself—that he can succeed as an artist. After spending time with Andrew in and out of bed, Jeremy struggles not to fall for the damaged viscount, knowing the season will likely end in Andrew's engagement.

Between a meddling cousin, a widow on the hunt for a new husband, and their own doubts about the relationship, how can Andrew and Jeremy shed the expectations of others to find true happiness?

Ok. So…..in the beginning of this book when I realized that it was M/M Historical Romance (I had just thought it was a regular HR) I was a little taken aback. One of the reasons I like HR is the dynamic in these books of the woman finding a husband. That’s the premise of all the ones I’ve read. It’s interesting to me to read about how things were done back then. Sometimes I feel like we’ve lost some of that gentlemen/lady, manners, a woman is a woman and a man is a man type of thing. Then my brain starts working again and I slap myself back into this century. By that time I’ve enjoyed a wonderful book.

However, the M/M threw me for a minute. But only for a minute. Once the story started unfolding and more of Andrew and Jeremy’s story came out, it turned out to be really amazing! I sorta forgot that they were men! The love that the author is able to pour into this story is simply amazing!!

Set in the 1800’s and at a time when gays would be, at the least outcast, if not arrested and killed, it’s a huge risk to live the life you want. The author brings this to light in a fantastic way. The struggle between being who you are and living in the public eye is difficult now….but in the 1800’s was almost impossible.

I have read M/M books many times before, a handful of F/F books and lots of Historical Romance. I don’t always seek them out, but I always enjoy them. This book did not disappoint and for many reasons it’s a book that needs to be read!! To get this type of story out would be wonderful. I had no idea that this was Alyson’s first book!!! She is on her way to one hell of a career!!!! This book was absolutely wonderful!!

Definitely a story that needs to be read, a must read!!!

Sitting in the carriage outside Boodle’s, Jeremy fiddled with his coat buttons. A cold sweat had started along the back of his neck. Talking about finding a patron was one matter. Actively looking for one was completely different. He looked over at Andrew. The man was the embodiment of fashionable: his jet black tailcoat was expertly tailored, the waistcoat beneath adding a touch of colour and pattern. Even his cravat was tied in a perfect Osbaldeston. Next to him, Jeremy looked like a simple country boy, wearing clothing his father had bought him when he entered Oxford. His stomach rolled, and he regretted eating such a large dinner.

Jeremy fastened his buttons for a third time.

“Just relax. Hands at your sides. Deep breaths. Follow my lead and stay by my side.”

Nodding, Jeremy let his hands drop. He waited until Andrew opened the carriage door before climbing out. The sight in front of him was formal and imposing, and Jeremy wanted nothing more than to climb back into the carriage. The ground floor exterior was a white stone, while the upper levels were brick. The showpiece of the building, though, was the large, domed window in the centre, trimmed by white, scalloped stone.

Andrew clapped Jeremy on the shoulder and steered them toward the door. It felt rather like he was being marched to the gallows. As they passed through the columned entrance, Jeremy balled his fists at his sides.

“You have to relax, Jeremy,” Andrew murmured. “No one is going to come and escort you out. You are here as my guest, and therefore you belong here. Unclench your fists. Drop your shoulders. Remember, every man you meet here is a potential patron. Treat them as such. Be respectful, but be yourself.”

Jeremy nodded, forcing his shoulders down. “All right. Where to first, Cardwell?”

After a giving Jeremy a quick tour of the ground floor, Andrew led him up the steps, toward the salon. A number of men had already started to gather at the card tables, and Jeremy stayed as close to Andrew as he possibly could. A large man with a bulbous nose and beady eyes broke away from the rest and started toward the both of them, favouring his left leg.

“Thomas Stanhope,” Andrew whispered. “A member of the Commons and not someone you want to work with.”

“Cardwell!” The man’s voice was thin and raspy, and his gaze darted between Andrew and Jeremy. “Back just in time for the Season, I see. Is your uncle with you?”

Andrew’s lips pressed into a thin line. “Uncle Richard passed a few weeks ago. You sent a letter expressing your condolences.”

Stanhope’s eyes widened, then narrowed. “Did I? I…You must forgive me. My mind is not what it once was.”

“Of course.” The words came out clipped. “Stanhope, allow me to introduce my friend, Mr. Jeremy Leighton.”

A flicker of emotion crossed Stanhope’s face, though Jeremy couldn’t place it. Whatever it was made him uncomfortable.

“Leighton…” The man frowned, as though he were trying to piece together a puzzle.

“The pleasure is mine.” Stanhope didn’t release his grip. “Tell me, how did you become acquainted with our Cardwell, here?”

The man’s palm was sweaty and Jeremy longed to pull away, but when he tried, Stanhope simply tightened his grip. “My father was friends with Lord Richard Cardwell. I’ve been acquainted with his family since birth.”

The confusion twisted into something like satisfaction, and Stanhope smirked, a gleam in his eye.

Jeremy looked over Stanhope’s shoulder to see a man taller than Andrew walking over. When he looked back at Stanhope, the man’s expression had soured.

“Excuse me. I look forward to seeing you again, Mr. Leighton.”

Stanhope walked away, his expression clouded. Andrew breathed a sigh of relief and the tension visibly eased.

“Perfect timing, Percy,” Andrew said. “I thought I would have to cut Jeremy’s hand off to get him away.”

“You looked like a caged animal.” The man embraced Andrew and then pulled away. “I wondered if you would be here for the Season. We placed bets on whether or not you would turn up. Thaddeus put you down as sitting out.”

Jeremy blinked. How could he be so crass?

“It’s as though he doesn’t know me at all,” Andrew shot back. He turned to Jeremy. “Lord Percival Beaumont, this is Mr. Jeremy Leighton. Percy and I attended Harrow and Oxford together.”

As Beaumont shook his hand, Jeremy could practically feel the man scrutinizing his appearance. “Pleasure to make your acquaintance, my lord,” he said, not quite meeting Beaumont’s gaze.

Beaumont gave him the same easy-going smile he gave Andrew. “Pleasure’s all mine. Please, call me Percy. Andrew, Thaddeus and Oliver are at May’s Buildings. I thought you might want to head over.”

Andrew looked to Jeremy. “What do you think? Would you rather visit the Eccentrics than stay here?”

Given the stuffy crowd and their interactions with Stanhope, Jeremy was more than eager to leave. “Yes. Could we go, please?”

The trio headed back down the stairs and out the door. Rather than hailing a carriage, they set off on foot. The sun had almost completely set, and a slight chill had entered the air, but it wasn’t anything Jeremy’s coat couldn’t protect against. As they walked, Jeremy found himself trailing behind Andrew, with Percy at his side.

“So you went to school with Andrew, then?” Jeremy asked. It was easy to relax around Percy, who treated him with the same warmth he treated Andrew. Stanhope, with his odd behaviour, had had the opposite effect on him.

Percy nodded. “Our families run in the same circles, so of course I knew Andrew, but I didn’t become friends with him until university.” He lowered his voice. “We, ah, share similar interests.”

The meaning was clear. Already, Jeremy was starting to pick up on the cues and the codes. “Of course,” he said.

Part of him wanted to ask whether or not they had been together, but a much larger part didn’t care to know.

“I do believe I’ve stunned you. Forgive me, I’ve said too much.”

“I see.” Percy nodded slowly. He glanced ahead at Andrew before turning back to Jeremy. “I wouldn’t worry, if I were you. What happened between us was years ago, and I found we’re much better suited as friends. Relax.”

“I would have a greater chance at relaxing if everyone stopped encouraging me to do so,” Jeremy retorted.

“My apologies. I meant only that I would like to get to know you better, as a friend of Andrew’s.”

“Gossiping about me, are you?” Andrew’s voice came from up ahead.

“You only wish,” Percy replied. He looped his arm through Jeremy’s. “Tell me about your relationship with Andrew.”

“My father was close friends with Andrew’s uncle, Richard.”

Percy flashed him a smile. “That tells me nothing about you and Andrew.”

“There’s not much to say.” Jeremy licked his lips. “I’m an artist looking for a patron. Andrew saw my work and commissioned me to paint his portrait, and in return he offered to let me come with him to London.”

“And does he give you anything else in return?”

Anger flared in Jeremy’s veins and he let out a harsh breath. “I don’t think that’s any of your business.”

“I mean nothing by it,” Percy said gently. “As I said, I only wish to get to know you better. I know Andrew, and I only want the best for him. For you both. I know how difficult it can be to get close to him.”

“What do you know of his difficulties?”

“As one of his oldest friends, I believe a better question would be what do I not know of his difficulties?” The man regarded him with an air of suspicion before relaxing. “Come to my townhouse tomorrow afternoon. We can discuss the matter further there.”

“And what do I tell Andrew?”

“That he isn’t invited.” Percy laughed, his entire face lighting up. “He’ll hardly like it, but he will recover. Sometimes it is nice to remind him that he cannot control everything and everyone.” 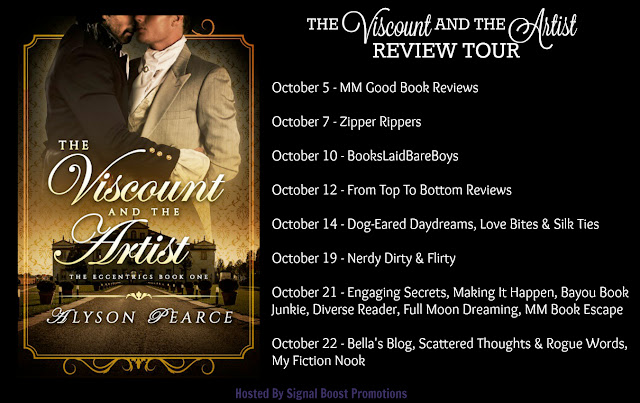 Alyson Pearce is an American transplant currently living in London, where she works full time in publishing and as an author of M/M romances.
She fell in love with romances after discovering her grandmother’s library and hasn’t looked back.
As a member of the LGBT community, she believes that everyone deserves their chance at a happily ever after. In her spare time, Alyson enjoys cooking, reading, and shouting at contestants on Chopped. The Viscount and the Artist is her first novel. 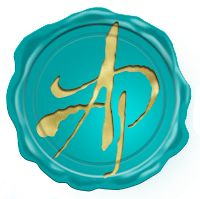 
Posted by Gretchen Anderson at 9:28 AM