They’ve done all kinds of work, from private investigations to highly classified governmental operations. Former military, their tight-knit brotherhood is now Atrox Security. These men fear nothing, they are unwavering, unafraid, and unrelenting. They are the Undaunted Men.

Quinn doesn’t want to take the job, but he has no choice. He owes a debt to the Moretti mob, and last he checked, they don’t take no for an answer.

He takes a moment to soak in the information. A pregnant mafia princess, wanted for murder, and he's supposed to track her down.

The professed father is a childhood friend, yet he’s considered a potential enemy of the family. This could get very interesting.

What starts out as a simple task, one that could easily take him one day to execute, has turned into so much more than he bargained for.

They’re each fighting their own personal demons, and it’s more than just a chase at hand. They both have secrets, hearts are on the line, and he resolves himself to go above and beyond the call of duty for reasons he can’t understand.

The last thing he ever intends on finding is an angel.

Join Quinn and Alexis as their unique story unfolds in two full-length novels released three weeks apart. You will fall in love with Kimber, a lovable retired military working dog who becomes an integral part of the storyline.

You know you have a love/hate relationship with a good cliffhanger in a book, but if you’ve read my previous books, you are no stranger to this simple fact. I - LOVE - CLIFFHANGERS. I have to live up to my name, after all.

WOW! Hot Mafia/Military drama here! Love this story and the writing is great!!

Quinn doesn't want to go out on a wild goose chase, in the mountains, to find a lost, pregnant, mafia princess; but he has to. He owes the head of the Moretti mob a favor and he's collecting for the benefit of his daughter.

He's supposed to find her and bring her back. Simple, right? However, once he finds her - she's not at all what he's assumed about her or was told. Things aren't adding up.  Quinn & Kimber (his military dog), decide to stick around and figure out more about this situation.

Alexis keeps her secrets pretty close. But she's finding that with Quinn she wants to tell him everything. Some things just can't be discussed.  Will she learn to fully trust him? How far will Quinn go in this "relationship"?

This book is hot and the chemistry is off the charts. I can't wait for the second part! The cliffhanger is just MEAN! LOL Thank goodness book two comes out soon!!

“It’s actually pretty good. Tastes like chicken.” She shrugs her shoulders as if eating rattlesnake is an everyday occurrence. I look at her with pride, then turn to make myself a plate. Out of the corner of my eye, I see a flash of movement, and then out of nowhere, Kimber leaps up and scurries off. I turn around and watch with curiosity as she runs to a spot about five feet behind Lexi, sniffing the ground. My mouth gapes open. I can’t believe what I think I just saw happen before my eyes.

“Am I seeing things?” I question in a high-pitched voice, waving my spatula around. “I know you did not just spit that bite of meat out in your hand, and then chuck it over your shoulder.” I point my spatula at her accusingly with a raised brow.

“I know you did not just do that.” She has guilt written all over her face, her lips forming a thin line, and then she gets all squirmy. When she doesn’t answer me, I call her out.

“You really enjoyed that, did you?” I grab another piece of meat and then lean toward her. I slowly trace the fire-roasted meat over her lips, encouraging her, “Second one tastes even better.” Her lips are tightly pressed closed as she shrinks away from me. “What's wrong, my little Yankee angel? Don’t go bashful on me now; there’s plenty to go around.”

“Quiiinn,” she drawls out my name on a whine.

“Yeesss?” I mimic her, the deep baritone of my voice questioning her.

“All right, all right, I’m sorry,” she confesses, exasperation lining her voice. “I was just trying to impress you, and in my defense, I chewed it as long as possible. It tasted like chicken chewing gum,” she declares, making a face as she crinkles her nose. Internally, I’m bursting with laughter as she makes excuses.

“And the more I chewed, the more I thought about what I was chewing, and it just wouldn’t break down in my mouth.”

My shoulders start to shake, and I can’t school my features any longer. She swats at my chest, and I grab her wrist, pulling her into me as I break out with deep laughter.

“Now, was the truth so hard to tell?”

“Don’t I at least get credit for trying it?” She then pouts, displaying her doe eyes of innocence.

“It’s only when you swallow that you get credit for being a real woman,” I tease. 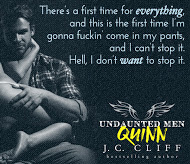 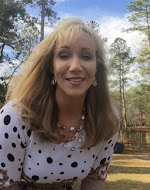 The one thing JC works most
hard at is steering clear of the typical romance templates. JC Cliff likes her plots to be unique, one of a kind, and never read before storylines.

JC Cliff is an independent author who enjoys creating page turning novels from the moment you pick up the book until the last page is read. She loves a good book full of mystery, intrigue, scorching hot romance, and all the elements of suspense.

She's a die hard 80's rock'n roll fan, and loves a good concert! JC wears many hats. They include being a wife of 24 years, 4 children, a small business owner, writer, reader, and what ever else is required of her. She loves taboo stories with twists and turns, and full of suspense.

She likes to spend her time with her family and friends. Her pastimes include: offshore fishing, learning anything new, sewing, spending time at the beach, or the mountains.

If you're interested in getting your hands on an advanced release copy of her upcoming books, sneak peek teasers, or information on her upcoming personal appearances, and sales, you can join her newsletter list and get those details delivered right to your inbox!